What Does MAGAnomics Mean?

The term MAGAnomics refers to President Donald Trump's strategy for improving America's economy. The first half of the word, MAGA, is an acronym (Make America Great Again), while the second half of the word in borrowed from "economics".

The term MAGAnomics is a TRUMPISM.

The overarching aim of MAGAnomics is to sustain economic growth at 3%.

When I write MAGAnomics, I mean this: 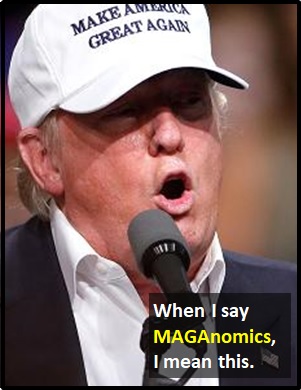 Examples of MAGAnomics in Sentences

Here is an example of MAGAnomics being used in a conversation:

An Academic Look at MAGAnomics

Of note, MAGA (Make America Great Again) is an acronym as it is spoken like a word. (NB: Acronyms contrast with initialism abbreviations, which are pronounced using their individual letters.)

Example of MAGAnomics Used in a Text