LOLAGE means "The Act of LOL [Laughing Out Loud]". LOLAGE is one of many terms deriving from LOL.

The suffix -AGE is added to make it noun (much like sabotage, advantage, espionage).

LOLAGE means "Laughing Out Loud (the noun)". This is the most common meaning for LOLAGE on social-media platforms such as Twitter, Facebook, and Snapchat.

When I write LOLAGE, I mean this: 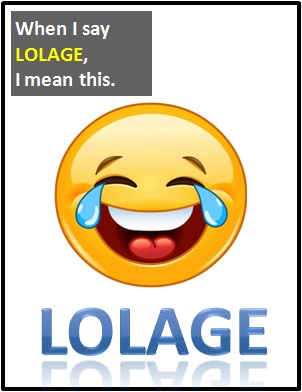 Examples of LOLAGE in Sentences

Here are examples of LOLAGE being used in conversations:

An Academic Look at LOLAGE

Example of LOLAGE Used in a Text

LOLAGE
Help Us To Improve Cyber Definitions
Please tell us using this form.