What Does ELOL Mean?

ELOL means "Evil Laugh Out Loud." Typically, ELOL is used in recognition of something being an "evil" plot.

ELOL is also used when a person is laughing at an unfortunate situation (i.e., a fall). When ELOL is used in this way, the person being laughed at will not generally find the situation funny.

When I write ELOL, I mean this: 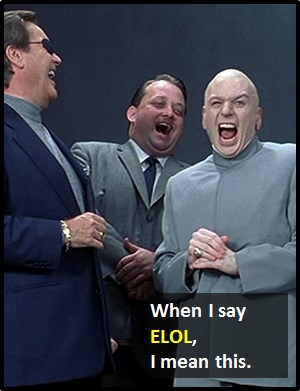 The image shows Dr. Evil and his henchmen laughing. (This is a scene from "Austin Powers International Man of Mystery.")

Examples of ELOL in Sentences

Here are examples of ELOL being used in conversations:

(Here, ELOL is used in recognition of an evil plot.)

(Here, ELOL is used to laugh at someone's misfortune.)

An Academic Look at ELOL

As it is spoken like a word, ELOL is an acronym. Acronyms contrast with initialism abbreviations, which are pronounced using their individual letters.

Example of ELOL Used in a Text

ELOL
Help Us To Improve Cyber Definitions
Please tell us using this form.