L8R G8R means "Later 'gator," which is short for "See you later, alligator."

The rhyming phrase "See you later, alligator" was made popular in the 1950s when rock-and-roll band Bill Haley and The Comets had a hit with a song of the same name.

It is believed that the phrase first appeared in print on February 16th 1954, when US newspaper the Reno Evening Gazette included "See you later, alligator" in its "Words, Wit and Wisdom" column, which chronicled the rise of "teen speak" for the older generation in the US. 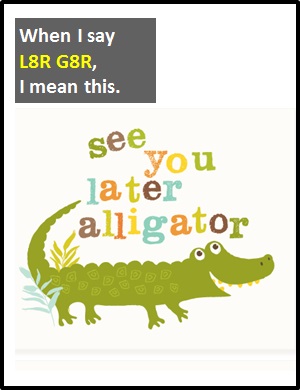 Examples of L8R G8R in Sentences

Here is an example of L8R G8R being used in a conversation:

An Academic Look at L8R G8R

L8R G8R is defined as a cyber term because some of its characters are used to substitute letters. Many cyber terms were created to reduce the number of key strokes required to write words, but since the arrival of predictive texting and keyboards on mobile devices this efficiency is less important.

L8R G8R is typically used as a standalone declarative sentence. For example:

Before the digital era, we would have said something like "see you later" or "see you anon" instead of L8RG8R.

Example of L8R G8R Used in a Text