What Does SYL Mean?

SYL means "See You Later." The use of the abbreviation SYL can be taken literally to mean that the sender will be meeting the recipient face-to-face sometime during the same day. However, it is just as often used to indicate that they will be in touch again soon, either by telephone, email or text message.

The abbreviation SYL is often used at the end of a conversation, whether or not the sender expects to meet with or even contact the recipient again soon.

There are many other abbreviations used to represent the phrase "See You Later," including:

When I write SYL, I mean this: 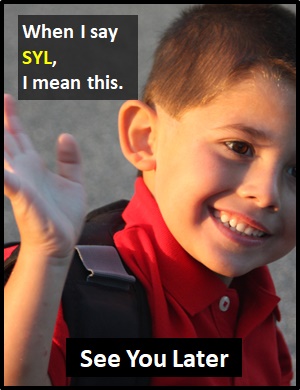 SYL is a casual way of saying "Goodbye."

Examples of SYL in Sentences

Here are examples of SYL being used in conversations:

(Here, SYL is being used sarcastically.)

An Academic Look at SYL

SYL is typically used as a declarative sentence (i.e., a statement). It acts as a salutation at at the end of a conversation.

As it is pronounced using its individual letters (i.e., "Ess Why Ell"), SYL is classified as an initialism abbreviation. Initialisms are different to acronyms, which are spoken like words.

Before the digital era, we might have just said "See You Later" instead of using the abbreviation SYL.

Example of SYL Used in a Text

SYL
Help Us To Improve Cyber Definitions
Please tell us using this form.