What Does CULA Mean?

CULA means "See You Later, Alligator." The saying was the title of a rock-'n'-roll song which was a smash hit for Bill Haley and His Comets in 1955. The phrase may have already been in use in parts of the southern USA prior to the release of the song.

The abbreviation CULA is a light-hearted way of saying “See You Later”. Its use is really only appropriate between friends.

As with the abbreviation, CUL, CULA can be taken literally to mean that you will be meeting that person face-to-face sometime soon, but it is just as often used to indicate that someone will be in touch again, either by telephone, email or text message. Sometimes the abbreviation CULA is also used at the end of a conversation, whether or not the sender expects to meet with or even contact the recipient again soon.

In speech, the standard reply to “See you later alligator” is the song's next line: “After a While, Crocodile.”

Of note, CULA can also be written as "SULA". However, "CULA" is the more common abbreviation.

When I write CULA, I mean this: 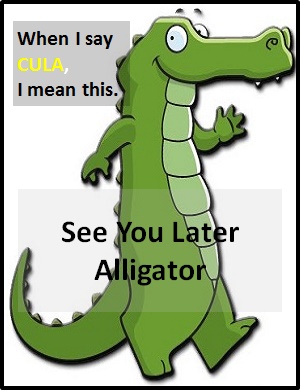 Examples of CULA in Sentences

Here are examples of CULA being used in conversations:

An Academic Look at CULA

CULA is an initialism abbreviation. Technically, this means it is pronounced using its individual letters (i.e., See Yoo Ell Eh), but as this is harder to say and less amusing than "See You Later Alligator" it is not often uttered using its letters. In other words, the abbreviation CULA is for efficiency in writing and not efficiency in speech.

The abbreviation CULA is normally used as a standalone declarative sentence (i.e., a statement) with the meaning "See you later”. CULA is not often used as another part of speech within a wider sentence.

Before the digital era, we would have just said "See You Later Alligator" instead of CULA.

Example of CULA Used in a Text