What Does IDC Mean?

Below are the most common meanings for IDC:

When I write IDC, I mean this: 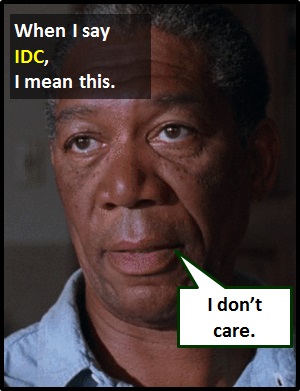 Examples of IDC in Sentences

Here are examples of IDC being used in conversations:

(Here, IDC means "I don't care." Note: For added effect, write idc in lowercase as this suggests you can't even be bothered to press Caps Lock.)

(Here, IDC means "In due course." It carries the connotation of "Once the prerequisites have been done, confirmation will be sent." In this meaning, IDC is often written idc (i.e., in lowercase.)

An Academic Look at IDC

When IDC means "In due course," it is an adverb of time. When it means "I don't care," it is a standalone declarative sentence. However, it can also be used like a transitive verb (i.e., one that takes a direct object) which translates as "I don't care about…". For example:

(Here, the direct object is the money.)

IDC is an initialism abbreviation. This means it is pronounced using its individual letters (i.e., Aye Dee See). (NB: Initialisms contrast with acronyms, which are spoken like words.)

Example of IDC Used in a Text

IDC
Help Us To Improve Cyber Definitions
Please tell us using this form.