HANL (Have A Nice Life) is used to say "goodbye forever." It can carry the following connotations:

When I write HANL, I mean this: 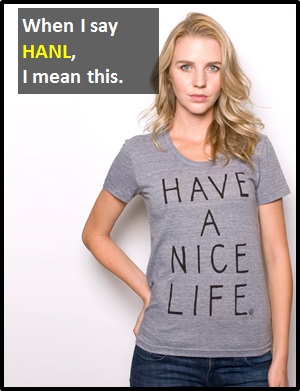 HANL can carry a positive or negative sentiment. It depends on context.

Examples of HANL in Sentences

Here are examples of HANL being used in conversations:

(Here, HANL carries the connotation "our business is done.")

(Here, HANL carries the connotation "I have messed up your life.")

(Here, HANL carries the connotation "Our paths are unlikely to cross again.")

An Academic Look at HANL

HANL is used as a standalone declarative sentence with a meaning similar to "I wish you a nice life."

Of note, HANL is an initialism abbreviation. This means it is pronounced using its individual letters (i.e., Aich Ay En Ell). (Initialisms contrast with acronyms, which are spoken like words.)

Before the digital era, we might have said something like "good riddance" (negative) or "God's speed" (positive) instead of HANL.

Example of HANL Used in a Text

HANL
Help Us To Improve Cyber Definitions
Please tell us using this form.