What Does HAGD Mean?

HAGD means "Have A Good Day." The abbreviation HAGD is typically used at the end of a text-based conversation as a way of wishing the recipient all the best for the rest of the day.

HAGD is a variation of HAND ("Have A Nice Day"), an expression commonly used in the US to conclude a conversation. Since "Have A Nice Day" is often used by service employees to customers at the end of a transaction, its usage has resulted in the phrase developing a cultural connotation of impersonality and lack of interest. "Have A Good Day" may be considered a less clichéd alternative.

The abbreviation HAG1 (Have A Good One) is used with exactly the same meaning as HAGD.

When I write HAGD, I mean this: 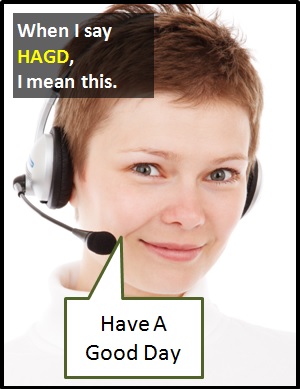 I hope you have a good day.

Examples of HAGD in Sentences

Here are examples of HAGD being used in conversations:

An Academic Look at HAGD

HAGD is a salutation i.e., a gesture in recognition of someone's arrival or departure. In this instance, HAGD would be used to close or sign-off from a conversation.

Before the digital era, we might have said something like "Take care" of "Have a nice day" instead of using HAGD.

Example of HAGD Used in a Text

HAGD
Help Us To Improve Cyber Definitions
Please tell us using this form.