What Does GOI Mean?

GOI means "Get Over It." The abbreviation GOI is a way of directing or ordering someone to drop an issue and to get on with life. The use of GOI indicates that the sender is losing patience and that the recipient should adopt a more positive and productive approach.

"Get Over It" is the title of a 2001 film starring Kirsten Dunst and Ben Foster. It follows the story of a popular high school basketball star who gets dumped by his girlfriendand.

When I write GOI, I mean this: 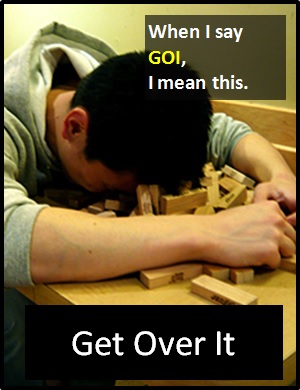 Get on with life.

Examples of GOI in Sentences

Here are examples of GOI being used in conversations:

An Academic Look at GOI

GOI is typically used as an imperative (i.e., an order). It is also an interjection. An interjection is not grammatically related to any other part of the sentence. It is included in a sentence to express a sentiment such as surprise, disgust, joy, excitement, or enthusiasm. In formal writing, interjections are often offset from the surrounding words with commas.

Before the digital era, we might have said something like "Move on" or "Let it go" instead of using GOI.

Example of GOI Used in a Text

GOI
Help Us To Improve Cyber Definitions
Please tell us using this form.