What Does EIE Mean?

EIE means "Enough Is Enough." The abbreviation EIE is another way of saying "This has to stop now." It is used when an ongoing situation becomes intolerable or to ask a person to stop talking, especially if they are bombarding you with details or ranting about something.

The phrase "Enough is Enough" has been used as a slogan by the homeless charity Shelter and is the title of a song made famous in 1999 by Barbara Streisand and Donna Summer. Most recently, it was used by UK Prime Minister Theresa May following the spate of terrorist attacks in London and Manchester in 2017.

When I write EIE, I mean this: 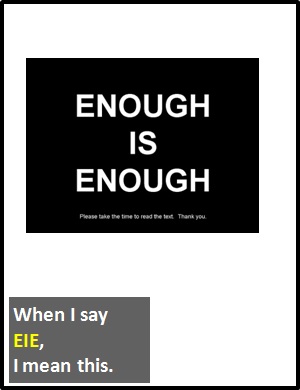 EIE means "Enough is Enough" and is used to say that something needs to stop immediately.

Examples of EIE in Sentences

Here are examples of EIE being used in conversations:

An Academic Look at EIE

EIE is used as a standalone declarative sentence (i.e., a statement). In other words, it is not used as another part of speech within a wider sentence.

Example of EIE Used in a Text

EIE
Help Us To Improve Cyber Definitions
Please tell us using this form.