What Does SI Mean?

The abbreviation SI is typically used with the meaning "Stop It!" as a direct request or order to someone to stop doing something. In this context, SI often expresses amused disbelief.

When used with the meaning "Stupid Idiot," the abbreviation SI is typically used as an insult, either directly or when referring to a third party.

SI is often used on online dating sites to indicate that a user is looking for someone with "Similar Interests."

SI also means "Similar Interests." This is the most common definition for SI on online dating sites, such as Craigslist, Tinder, Zoosk and Match.com, as well as in text messages and on adult chat forums:

When I write SI, I mean this: 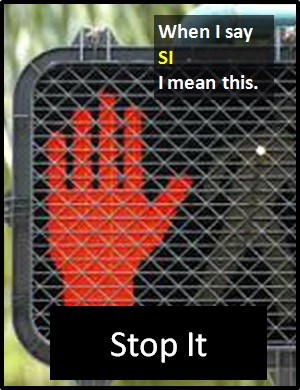 Examples of SI in Sentences

Here are examples of SI being used in conversations:

An Academic Look at SI

Before the digital era, we would have just said something like "Stop It," "Stupid Idiot," or "Similar Interests" instead of using the abbreviation SI.

Example of SI Used in a Text

SI
Help Us To Improve Cyber Definitions
Please tell us using this form.