The abbreviation NIFOC is an acronym used with the meaning "Naked In Front Of Computer." NIFOC is typically used in dating chat in a provocative, flirty way. However, it can also be used as a joke, with the intention of shocking the recipient.

When I write NIFOC, I mean this: 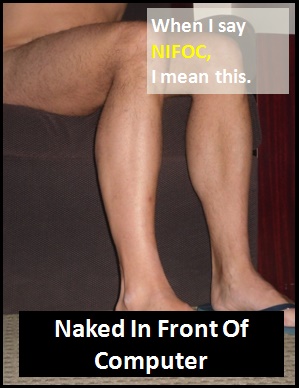 NIFOC is often sent as a joke.

Here are examples of NIFOC being used in conversations:

An Academic Look at NIFOC

As it is spoken like a word, NIFOC is an acronym. Acronyms contrast with initialism abbreviations, which are pronounced using their individual letters.

NIFOC is typically used as a standalone declarative sentence (i.e., a statement). In other words, it is not often used as another part of speech within a wider sentence.

Before the digital era, a telephone caller might have said something like "I'm not wearing anything" instead of using NIFOC.

Example of NIFOC Used in a Text