What Does GGWP Mean?

The abbreviation GGWP is used with the meaning "Good Game, Well Played" to congratulate someone after any sort of game (e.g., a sports match, a board game or, especially, an online game).

GGWP is often seen in the form #GGWP, i.e., with a hashtag (especially on Twitter). It is also commonly seen in the abbreviated versions #GG and #WP.

In gaming, GGWP is typically used at the end of an online game (especially on Discord, a communications app for gamers) to congratulate other players for their efforts. The term can be used by either the winner or loser of the game. GGWP contrasts with GLHF (Good Luck, Have Fun), which is often used by gamers at the start of an online game.

GGWP is also often used to congratulate someone for a shrewd move in life. For example:

Here's a short video explaining how to use GGWP:

"Good Game, Well Played" is the most common definition for GGWP on gaming apps, such as Discord and Telegram, as well as on Snapchat, WhatsApp, Facebook, Twitter, and Instagram.

When I write GGWP, I mean this: 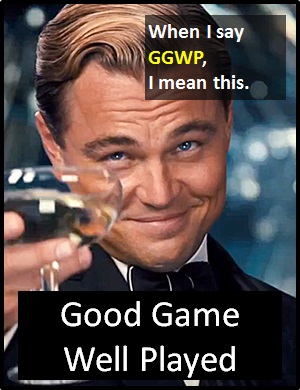 GGWP is used to congratulate other players at the end of a game or match.

Examples of GGWP in Sentences

Here are examples of GGWP being used in conversations:

An Academic Look at GGWP

GGWP is used like two declarative sentences (i.e., two statements) with the meanings "That was a good game" and "Well played." GGWP is not normally used as a part of speech in a wider sentence.

As it is pronounced using its individual letters (i.e., "Gee Gee Dblyoo Pee"), GGWP is classified as an initialism abbreviation. Initialisms are different to acronyms, which are spoken like words. However, GGWP is not often spoken using its letters. It is usually employed for efficiency in writing and not efficiency in speech.

Before the digital era, we would have just said something like "well played" or "good show" instead of GGWP.

Example of GGWP Used in a Text