What Does G2R Mean?

G2R means "Got To Run." The abbreviation G2R is used informally to close a conversation. It indicates the sender is late or in a hurry.

The muscial "Edges," written by Pasek & Paul in 2005, features a song titled "I've Gotta Run." The show has been performed in many countries including Australia, America and France.

When I write G2R, I mean this: 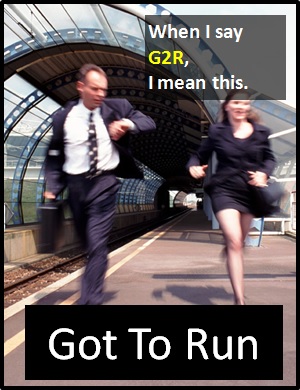 G2R is another way of saying you need to be somewhere else.

Examples of G2R in Sentences

Here are examples of G2R being used in conversations:

An Academic Look at G2R

G2R is classified as a cyber term as opposed to an initialism abbreviation or an acronym. Initially, cyber terms were introduced for brevity, but, particularly with the advent of predictive texting and on-screen keyboards, they are now mostly employed for fun. Cyber terms differ from icons because they are not pictorial representations.

Although the phrase "Got To Run" can be taken literally, it is most often used figuratively; i.e., as an imaginative way of indicating that you are in a hurry.

Before the digital era, we might have said something like "Can't stop, I'm in a hurry" instead of using G2R.

Example of G2R Used in a Text

G2R
Help Us To Improve Cyber Definitions
Please tell us using this form.