What Does GTW Mean?

GTW means "Got To Work." The abbreviation GTW is typically used to end a conversation. GTW implies that the sender is very busy and does not have time for further chat. GTW can also be used to indicate that the sender cannot attend an event, as they will be working.

GTW can also be used with the meaning "Get To Work. In this context, GTW can be considered an order to stop chatting and to start or continue with a task.

When I write GTW, I mean this: 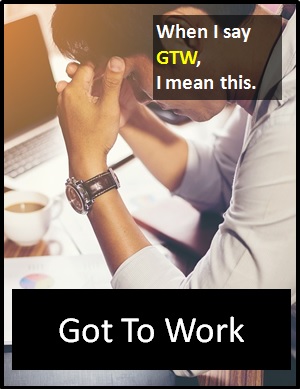 Sometimes you have just GTW.

Examples of GTW in Sentences

Here are examples of GTW being used in conversations:

An Academic Look at GTW

GTW is an abbreviation of the phrase "(I have) got to work." As it is pronounced using its individual letters (i.e., "Gee Tee Dblyoo"), GTW is classified as an initialism abbreviation.

Before the digital era, we would have just said something like "Got To Work" instead of using the abbreviation GTW.

Example of GTW Used in a Text

GTW
Help Us To Improve Cyber Definitions
Please tell us using this form.