What Does G1 Mean?

G1 means "Good One." The phrase "Good One" is commonly used in response to a statement or joke to show approval. However, it can also be used to express disbelief. For example: 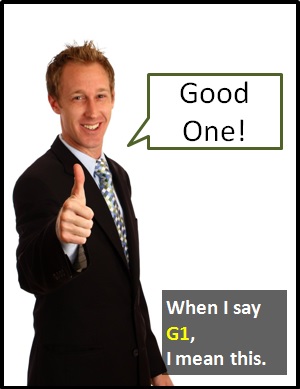 Examples of G1 in Sentences

Here are examples of G1 being used in conversations:

An Academic Look at G1

G1 is classed as a saying (i.e., a concisely written or spoken linguistic expression).

G1 is a cyber term, as opposed to an initialism abbreviation or an acronym. Initially, cyber terms were introduced for brevity, but, particularly with the advent of predictive texting and on-screen keyboards, they are now mostly employed for fun. Cyber terms differ from icons because they are not pictorial representations.

Example of G1 Used in a Text

G1
Help Us To Improve Cyber Definitions
Please tell us using this form.