What Does EOTD Mean?

EOTD means "End of the Day". The abbreviation EOTD is an idiomatic expression meaning "eventually" or "ultimately" (i.e., "in the end"). It is a short form of "At the end of the day" or ATEOTD.

This cliché often sparks irritation in people who hear it as it can suggest the speaker has used it to conclude a conversation when they've run out of ideas or interesting things to say.

When I write EOTD, I mean this: 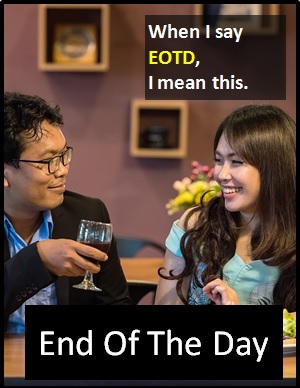 EOTD means "End Of The Day".

Examples of EOTD in Sentences

Here are examples of EOTD being used in conversations:

An Academic Look at EOTD

(Here, EOTD emphasizes that the verb (to go) will occur later.)

Example of EOTD Used in a Text