What Does DTT Mean?

DTT means "Don't Touch That." The abbreviation DTT is given as an order not to touch something or someone. This could be because doing so would be dangerous, inappropriate or could result in damage to the item. DTT is also used figuratively to mean "Don't broach that subject." In this meaning, it is similar to DEGT (Don't Even Go There). Of interest, "Don't Touch That" is a hip hop/rap track released in 1999 by Group X.

When I write DTT, I mean this: 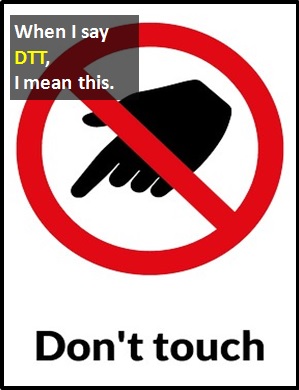 DTT is an order not to touch something or someone.

Examples of DTT in Sentences

Here are examples of DTT being used in conversations:

An Academic Look at DTT

As it is pronounced using its individual letters (i.e., "Dee Tee Dee"), DTT is classified as an initialism abbreviation. Initialisms are different to acronyms, which are spoken like words. DTT is used as an imperative (i.e., an order).

Example of DTT Used in a Text

DTT
Help Us To Improve Cyber Definitions
Please tell us using this form.