What Does DK Mean?

DK means "Don't Know." DK usually means that the writer does not know the answer to a question. Without further elaboration, the use of the abbreviation DK also implies that the user did not attempt to find the answer.

Of note, the abbreviation DK is also the top-level domain (world wide web country code) for Denmark. Amongst online gamers DK can also refer to the classic game Donkey Kong.

When I write DK, I mean this: 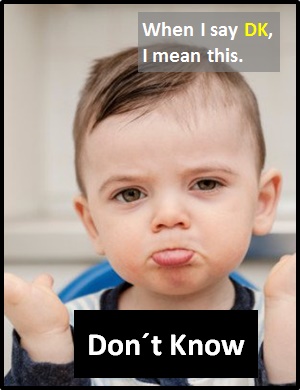 Examples of DK in Sentences

Here are examples of DK being used in conversations:

An Academic Look at DK

DK is an initialism abbreviation. Technically, this means it is pronounced using its individual letters (i.e., Dee Kay), but as this is harder to say than "Don't know" it is not often uttered using its letters. In other words, the abbreviation DK is for efficiency in writing and not efficiency in speech.

The abbreviation DK is normally used as a standalone declarative sentence (i.e., a statement) with the meaning "I don't know." DK is not often used as another part of speech within a wider sentence.

Before the digital era, we would just have said "I don't know" instead of using the abbreviation DK.

Example of DK Used in a Text

DK
Help Us To Improve Cyber Definitions
Please tell us using this form.