The abbreviation ISDK has three similar, but distinct meanings. The actual meaning will always depend on context:

When I write ISDK, I mean this: 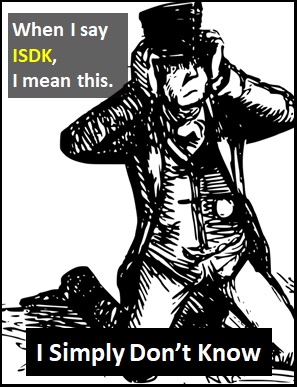 Examples of ISDK in Sentences

Here are examples of ISDK being used in conversations:

An Academic Look at ISDK

ISDK is typically used as a standalone declarative sentence (i.e., a statement). It is not normally used as another part of speech within a wider sentence.

Before the digital era, we would have just said "I Simply Don't Know," "I Seriously Don't Know" or "I Still Don't Know" instead of using the abbreviation ISDK.

Example of ISDK Used in a Text

ISDK
Help Us To Improve Cyber Definitions
Please tell us using this form.