What Does DIKY Mean?

The acronym DIKY is often used on social media, when a user receives a contact request from someone they don´t recognise. DIKY can be considered quite a rude way of responding to a contact and it is usually used to discourage further contact or conversation.

Of note, DIKY can also be written as "DIKU", which is equally popular.

When I write DIKY, I mean this: 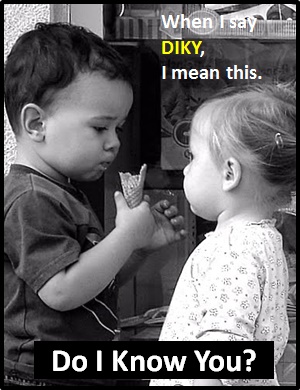 Examples of DIKY in Sentences

Here are examples of DIKY being used in conversations:

An Academic Look at DIKY

The acronym DIKY is normally used as a standalone declarative sentence (i.e., a statement) with the meaning "Do I know you?" DIKY is not often used as another part of speech within a wider sentence.

Before the digital era, we might have just said "Do I know you?" instead of using DIKY.

Example of DIKY Used in a Text

DIKY
Help Us To Improve Cyber Definitions
Please tell us using this form.