What Does DIDDO Mean?

The word DIDDO is best described as a sweet pronunciation of "Ditto," which is a typographic symbol indicating that the text above is repeated. For example: "Ditto" originally comes from the Latin word dictus, which means "having been said." It is sometimes typed as DIDO.

DIDDO and "Ditto" are often used in reply to the statement or message "I love you," as they allow the speaker to return the compliment without the embarrassment of saying those words. The use of "Ditto" in this context was popularized by Sam (Patrick Swayze) in the 1990 film "Ghost," when he replied to his girlfriend Molly (Demi Moore) after she said "I love you."

When I write DIDDO, I mean this: 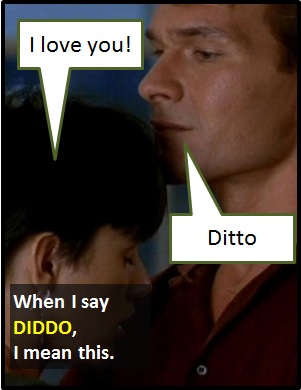 Examples of DIDDO in Sentences

Here is an example of DIDDO being used in a conversation:

An Academic Look at DIDDO

DIDDO represents a typographic symbol. It is a punctuation mark.

Before the digital era, we would have said "ditto" or something like "me too" or "same again," instead of using DIDDO.

Example of DIDDO Used in a Text