What Does B/W Mean?

B/W means "Between" or "Black And White."

"Between" is probably the most popular meaning of B/W in computer-based conversations, such as chat forums and instant messaging. However, "Black And White" is often seen when referring to a photograph in shades of black and white (as opposed to a colour photograph).

Of note, another meaning of B/W is "Backed With," which is commonly used in the context of vinyl singles, referring to the flip side (the B side) of the record.

When I write B/W, I mean this: 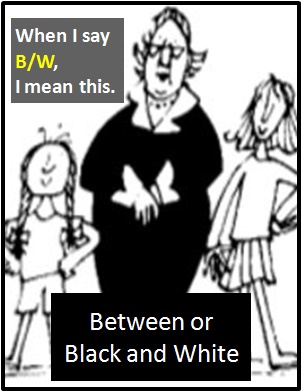 B/W: In this "Black and White" image the lady is "Between" two girls.

Examples of B/W in Sentences

Here are examples of B/W (meaning "Between") being used in jokes:

An Academic Look at B/W

B/W is usually seen as a contraction of the word "Between," which is a preposition. It is typically used to distinguish B/W two or more separate and distinct things. For example:

Example of B/W Used in a Text

B/W
Help Us To Improve Cyber Definitions
Please tell us using this form.