What Does BYAM Mean?

BYAM means "Between You And Me." The abbreviation BYAM is typically used in text-based communications such as instant messaging and chat rooms to ask for discretion. By using BYAM, the sender is indicating that they are speaking in confidence and do not wish the information to be disseminated any further.

Of note, BYAM is often used by people who like to gossip, in the full knowledge (and often in the hope) that the recipient of the information will pass it on.

When I write BYAM, I mean this: 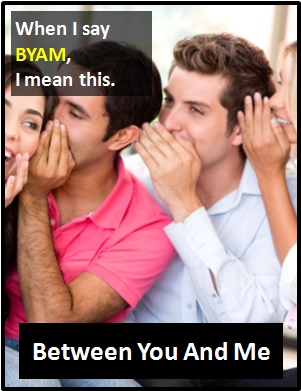 BYAM means "Between You And Me," but often indicates that the speaker would like the information to be passed on.

Examples of BYAI in Sentences

Here are examples of the abbreviation BYAM being used in jokes:

An Academic Look at BYAM

BYAM is an initialism abbreviation. Technically, this means it is pronounced using its individual letters (i.e., Bee Why, Eh, Emm). However, the abbreviation BYAM is typically used for efficiency in writing and not efficiency in speech; therefore, it is not usually uttered using its letters.

Before the digital era, we might have said something like "don't tell anyone I told you" or "just between us" instead of using the abbreviation BYAM.

Example of BYAM Used in a Text

BYAM
Help Us To Improve Cyber Definitions
Please tell us using this form.

B/W (between ) BYAI (between you and I ) JBU (just between us) DLS (dirty little secret) IITUWUTMAS (if I tell you will you tell me a secret?) WKS (well kept secret)