What Does BISS Mean?

When I write BISS, I mean this: 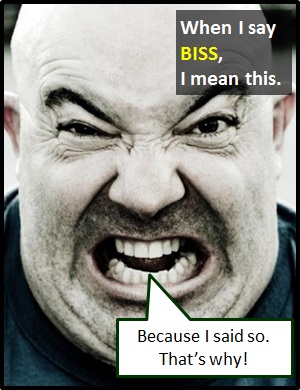 "Because I said so" is typically the answer given by a frustrated parent to a trying child.

Examples of BISS in Sentences

Here is an example of BISS being used in conversation:

An Academic Look at BISS

Even though BISS is an adverb of reason, it is commonly used as a standalone term, i.e., it is not often used as part of a wider sentence.

Before the digital era, we might have just said "Because I Said So" or "Because I Say So" instead of using the abbreviation BISS.

Example of BISS Used in a Text

BISS
Help Us To Improve Cyber Definitions
Please tell us using this form.