What Does CUZ Mean?

The abbreviation CUZ is a contraction used with the meanings "Cousin" and "Because." Here is more information about each of these definitions of CUZ, together with examples of use.

CUZ is widely used in text messaging and speech as a straightforward abbreviation of the word "Cousin." In this context, CUZ, as well as the actual word "Cousin," is often used as slang for "Friend." For example: Cousin is also abbreviated as CUZZ and CUH.

CUZ is often used in online chats and instant messaging as an abbreviation of "Because" (as in "for the reason that" or "in view of the fact that"). For example: CUZ is just one of many abbreviations of the word "Because." Others include:

"Because" is another common definition for CUZ.

When I write CUZ, I mean this: 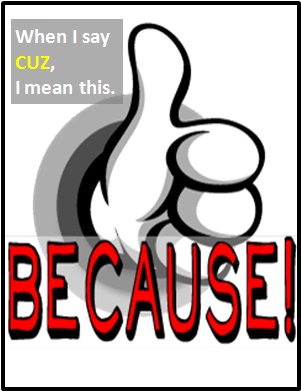 An Academic Look at CUZ

CUZ is also a slang word. Slang refers to words, phrases and uses of language that are regarded as very informal and which are often restricted to a special context or a particular group of users

Example of CUZ Used in a Text

CUZ
Help Us To Improve Cyber Definitions
Please tell us using this form.