The abbreviation BFF4L is typically used by teenage girls as a term of friendly endearment with the meaning "Best Friend Forever For Life."

BFF4L is one of the most over-the-top compliments that a person can pay to a friend. On the scale of exaggerated compliments, BFF4L is probably equal to BFFAE ("Best Friends Forever And Ever" or "Best Friends For All Eternity"), but easily ranks above:

When I write BFF4L, I mean this: 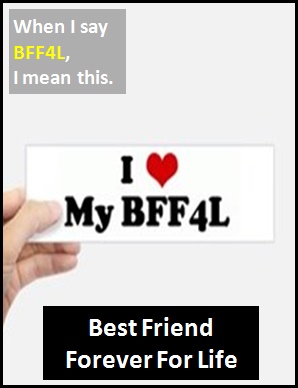 Not everyone has what it takes to be a BFF4L.

Examples of BFF4L in Sentences

Here are examples of BFF4L being used in conversations:

An Academic Look at BFF4L

BFF4L is defined as a cyber term because some of its characters are used as substitutes for letters. Most cyber terms were introduced to reduce the number of key strokes required to write the word, but since the arrival of predictive texting and keyboards on mobile devices, this efficiency is no longer required. Nevertheless, cyber terms are still regularly used to make messages more entertaining or to express individuality. Cyber terms differ from icons because they are not pictorial representations.

BFF4L is used as a noun. When the term is expanded, it is a noun phrase headed by the common noun Friend. (The words Best and Forever for life modify friend.)

Before the digital era, we might have said something like "bezza" or "besty" instead of using the abbreviation BFF4L.

Example of BFF4L Used in a Text

BFF4L
Help Us To Improve Cyber Definitions
Please tell us using this form.