BFFAE is also sometimes used by older girls and some boys as a humorous or sarcastic way of referring to or addressing a person.

When I write BFFAE, I mean this: 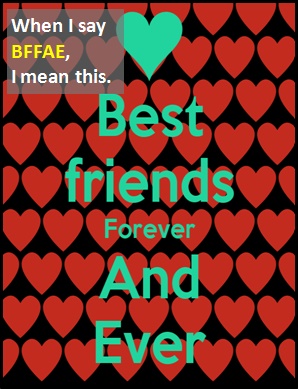 Forever and ever is longer than forever. Apparently.

Examples of BFFAE in Sentences

Here are examples of BFFAE being used in conversations:

An Academic Look at BFFAE

BFFAE is an initialism abbreviation. This means it is pronounced using its individual letters (i.e., "Bee Eff Eff Ay Ee"). Initialisms contrast with acronyms, which are spoken like words.

BFFAE is used as a noun. When the term is expanded, it is a noun phrase headed by the common noun Friend or Friends. (The words Best and Forever and ever or For all eternitymodify Friend(s) .)

Before the digital era, we might have said something like "bezzer" or "bestie" instead of using the abbreviation BFFAE.

Example of BFFAE Used in a Text

BFFAE
Help Us To Improve Cyber Definitions
Please tell us using this form.