What Does ASAT Mean?

The use of ASAT typically indicates that the sender does not wish to enter into further discussion on a subject. It is often used defensively, when the sender is being asked to justify themselves.

Of note: ASAT also means "Administrative Support Assessment Test." Until 2014, the ASAT was the test which established the minimum hiring requirements for United Nations General Service personnel. The ASAT was discontinued in 2014, and replaced with the "Global General Service Test" (GGST).

When I write ASAT, I mean this: 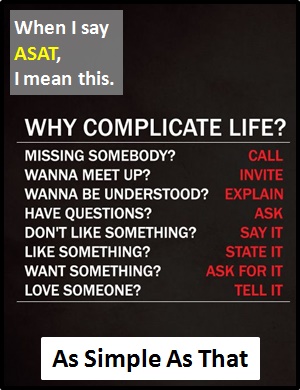 Examples of ASAT in Sentences

Here are examples of ASAT being used in conversations:

An Academic Look at ASAT

ASAT is an acronym (i.e., an abbreviation spoken like a word). Acronyms differ from initialism abbreviations, which are pronounced using their individual letters.

ASAT is typically used as a standalone declarative sentence (i.e., a statement). In other words, it is not used as another part of speech within a wider sentence.

Before the digital era, we would have just said "As Simple As That" instead of using the acronym ASAT.

Example of ASAT Used in a Text

ASAT
Help Us To Improve Cyber Definitions
Please tell us using this form.