What Does ARD Mean?

In text messaging and online, the abbreviation ARD is widely used with the meaning "Alright." In this context, it is typically used to indicate assent or agreement, or as a statement that everything is okay.

ARD is one of many abbreviations that mean "Alright." Others include: AIT, I8 and RD.

In many parts of the UK, ARD is also used as a contraction of the word Hard, to describe a person who is "Tough."

"Tough" is another definition for ARD.

When I write ARD, I mean this: 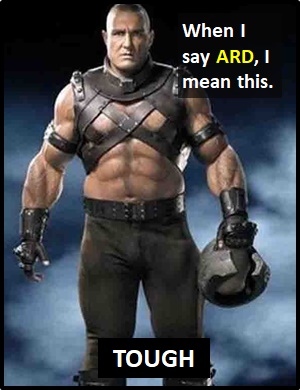 Examples of ARD in Sentences

Here are examples of ARD being used in conversations:

An Academic Look at ARD

Whether used with the meaning "Alright" or "Tough," ARD is a slang word. Slang refers to words, phrases and uses of language that are regarded as very informal and which are often restricted to a special context or a particular group of users.

When used with the meaning "Tough," ARD is a shortened version of the word Hard. Therefore it is a contraction. Contractions can be formed formed in a number of ways, including: For reasons of brevity in text-based conversations, contractions are rarely followed by periods/full stops and apostrophes are routinely omitted. (As is the case with ARD, which should be written as 'ard.)

The use of ARD to mean "Alright" or "Tough" long pre-dates the digital era.

Example of ARD Used in a Text

ARD
Help Us To Improve Cyber Definitions
Please tell us using this form.