What Does IGHT Mean?

The abbreviation IGHT is a contraction of the word "Alright," used to indicate assent, agreement or that everything is okay. Amongst teenagers (especially skaters), IGHT is often used as an informal greeting, with the meaning "Hello, how are you?," as well as a response, meaning "Fine" or "Okay."

IGHT is a further contraction of the abbreviation AIGHT, which also means "Alright."

When I write IGHT, I mean this: 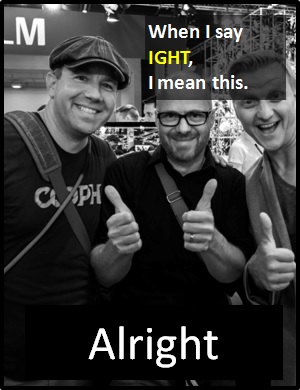 IGHT can be both a question and a statement.

Examples of IGHT in Sentences

Here are examples of IGHT being used in conversations:

An Academic Look at IGHT

IGHT is an abbreviation of the word "Alright," which can be used as both a response and a greeting. When used as a response, IGHT is typically used as a standalone declarative sentence (i.e., a statement). It is not normally used as another part of speech within a wider sentence.

IGHT can play the role of an interrogative sentence (i.e., a question), but it is commonly seen without a question mark. It can be written as "IGHT?" or "IGHT".

Before the digital era, we might have just said "Alright" or something like "Okay" or "How Are You?" instead of using IGHT.

Example of IGHT Used in a Text