What Does APN Mean?

APN means "As Per Normal." The abbreviation APN is typically used with the meaning "As Per Normal" to indicate that, in the sender's opinion, a situation has not changed or an event has turned out or will turn out as it always does. It is normally used in a humorous or sarcastic way.

APN has the same meaning as APU (As Per Usual).

Of note, APN also means "Access Point Name," which refers to the settings a smartphone reads to set up a connection to the gateway between a carrier's network and the Internet.

When I write APN, I mean this: 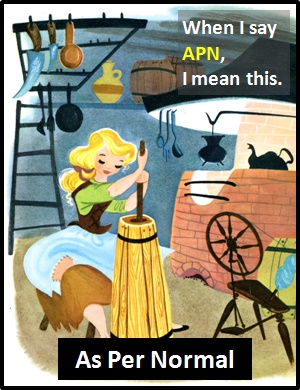 Examples of APN in Sentences

Here are examples of APN being used in conversations:

An Academic Look at APN

APN is an initialism abbreviation. This means it is pronounced using its individual letters (i.e., "Ay Pee En"). (Initialisms contrast with acronyms, which are spoken like words.)

APN is typically used as a standalone declarative sentence (i.e., a statement). It is not normally used as another part of speech within a wider sentence.

Before the digital era, we would have just said something like "As Per Usual" or "As Per Normal" instead of using APN.

Example of APN Used in a Text

APN
Help Us To Improve Cyber Definitions
Please tell us using this form.

APU (as per usual) APYR (as per your request) BAU (business as usual) SNAFU (situation normal, all f**ked up (military)) Using the currency symbols