What Does BAU Mean?

BAU usually means "Business As Usual" or "Back At You." It is also the name of a University of Design in Barcelona, Spain. Here's a little more information about each definition of BAU. (See below for examples of use.)

The abbreviation BAU is typically used in text-based messaging with the meaning "Business As Usual." It means that, despite what may be expected, the normal daily routine is continuing. The "Business" in BAU could be official business, but in text messaging, it is more likely to refer to the normal routine of daily life.

The phase "Business As Usual" was popularized in a speech given by Winston Churchill in 1914. It subsequently became a slogan for the rest of World War I.

BAU is also sometimes used to mean "Back At You." In this context, BAU is used as a response to a comment, with the meaning "The same to you" or "Likewise." It is a further abbreviated version of RBAU ("Right Back At You").

When I write BAU, I mean this: 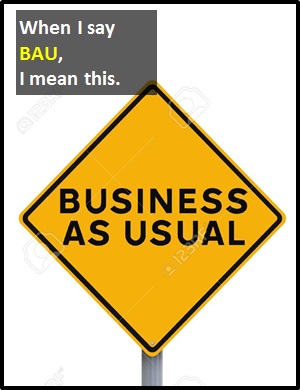 BAU also means "Back At You" and is the name of a University of Design in Barcelona.

"Back At You" is another definition for BAU.

Examples of BAU in Sentences

Here are examples of BAU being used in sentences, with the meaning "Business As Usual:"

(Here, BAU is being used in a negative sense and indicates frustration, cynicism or anger on the part of the speaker.)

Here are examples of BAU being used in sentences, with the meaning "Back At You:"

An Academic Look at BAU

When used with the meanings "Business As Usual" and "Back At You," BAU is an initialism abbreviation. Technically, this means it is pronounced using its individual letters (i.e., Bee, Ay, Yoo), but it is not often spoken using its letters. The abbreviation BAU is actually used for efficiency in writing, rather than for efficiency in speech.

Before the digital era, we might have said something like "Life goes on" or "Nothing has changed," instead of using the abbreviation BAU to mean "Business As Usual."

Example of BAU Used in a Text