What Does PDQ Mean?

PDQ means "Pretty Damn Quick." The abbreviation PDQ is used with the meaning "Pretty Damn Quick" to emphasize that something needs to be done very soon. The use of the word "Damn" usually indicates impatience on the part of the sender.

The origins of the phrase "Pretty Damn Quick" are uncertain. It may have first been noted in print in the book Memoirs of Matthews Charles, Comedian, which was published in 1839.

PDQ is sometimes expanded as "Pretty Darn Quick," as some people consider the word "Darn" less vulgar than "Damn."

When I write PDQ, I mean this: 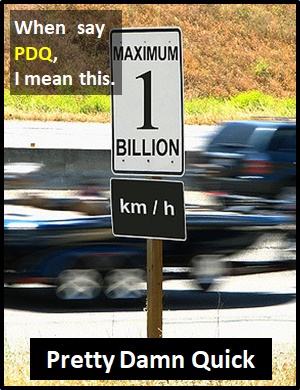 Examples of PDQ in Sentences

Here are examples of PDQ being used in conversations:

An Academic Look at PDQ

As it is pronounced using its individual letters (i.e., "Pee Dee Kew"), PDQ is classified as an initialism abbreviation. Initialisms are different to acronyms, which are spoken like words.

"Pretty Damn Quick" is an adverbial phrase. This is the term for two or more words which play the role of an adverb. An adverb is a word that describes a verb (i.e., a doing word), an adjective (i.e., a describing word) or another adverb.

Before the digital era, we might have just said "Pretty Damn Quick" instead of using the abbreviation PDQ.

Example of PDQ Used in a Text