ABCRACK means "Abdominal Line." The term ABCRACK describes the defined crease that goes down the middle of the abdominals. Some celebrities (e.g., Emily Ratajkowski, Bella Hadid, Hannah Bronfman) are renowned for having an ABCRACK.

Popularized by social media (mainly Instagram), the ABCRACK is described as "an accessory for the ideal body." The ABCRACK may be deemed an "unrealistic body craze" (just like the thigh gap, bikini bridge, and the finger trap.)

When I write ABCRACK, I mean this: 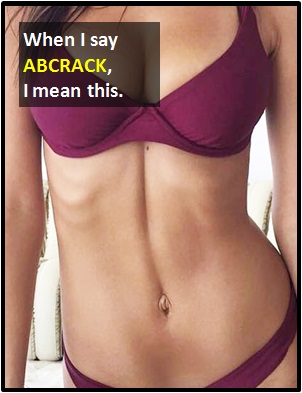 Examples of ABCRACK in Sentences

Here is an example of ABCRACK being used in a conversation:

An Academic Look at ABCRACK

As it is formed by merging two words into one, ABCRACK is classified as a portmanteau word. It is formed by amalgamating abdominal and crack.

ABCRACK is used as a noun (i.e., a naming word). For example:

(Here, ABCRACK is being used as a noun.)

Before the digital era, many popular body expectations didn't exist. A person with defined abdominal muscles would have just been described as "fit" or "athletic."

Example of ABCRACK Used in a Text

ABCRACK
Help Us To Improve Cyber Definitions
Please tell us using this form.