What Does ABS Mean?

ABS means "Absolutely," "Abdominals," and "Anti-Lock Braking System." Here is more information about each of these definitions of ABS, with examples of use.

The abbreviation ABS (usually typed and pronounced as "abs") is most commonly used in internet chat forums and text speak to mean "absolutely" (as in "completely" or "totally").

In this context, ABS is typically used to express agreement. For example:

ABS (again usually typed and pronounced as "abs") is also widely used online and in general speech to refer to the stomach muscles, more specifically, the rectus abdominis or "abdominals."

The ABS are the principal muscles that show when a person has a well-defined "six pack." For example:

ABS (pronounced "A.B.S.") can also refer to "Anti-Lock Braking System," which is an electronically-controlled safety system that prevents a vehicle's brakes from locking-up when they are applied harshly.

"Abdominals" (Stomach Muscles) is another common definition for ABS.

When I write ABS, I mean this: 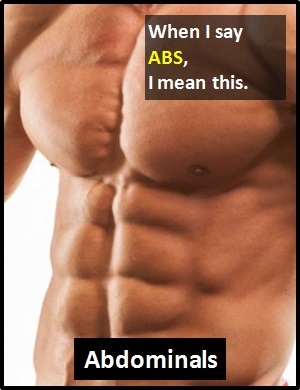 An Academic Look at ABS

When used to mean "Absolutely" or "Abdominals" ABS is a shortened version, or a contraction, of those words. Contractions tend to be formed in one of three ways: For reasons of brevity, contractions are rarely followed by periods/full stops and apostrophes are routinely omitted in text speak and on social-media platforms.

When used with the meaning "Anti-Lock Braking System" ABS is classified as an initialism abbreviation, because it is pronounced using its individual letters (i.e., "Aye Bee Ess").

Example of ABS Used in a Text

ABS
Help Us To Improve Cyber Definitions
Please tell us using this form.