What Does Y/N Mean?

In fanfiction Y/N means "Your Name." It is also more widely as an abbreviation of "Yes/No."

Here is more information about each of these definitions of Y/N, with examples of use.

Y/N is used with the meaning "Your Name" to indicate points in a fanfiction story where readers are able to insert their own name.

Y/N is a subgenre of fanfiction that is particularly popular on apps such as Wattpad and TIKTOK, especially amongst fans of K-POP bands such as BTS. For example:

Y/N is also used with the meaning "Yes/No." In this case, it is typically used as a question which requires a definite answer and which may indicate irritation on the part of the sender. For example: It can also refer to a "YES/NO Moment," i.e., the time a (usually very important) decision has to be made. For example:

Here's a short video explaining how to use Y/N:

"Yes/No" is another definition for Y/N.

When I write Y/N, I mean this: 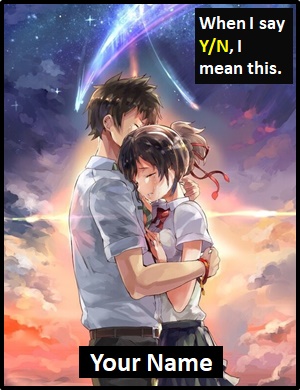 An Academic Look at Y/N

When used with the meaning "Yes/No," Y/N usually plays the role of an interrogative sentence (i.e., a question). However, even when used as a question, it is commonly seen without a question mark (i.e., it can be written "Y/N?" or "Y/N").

Example of Y/N Used in a Text

Y/N
Help Us To Improve Cyber Definitions
Please tell us using this form.