What Does WBY Mean?

The abbreviation WBY is used with the meaning "What 'Bout You?," which most often translates as "Hello, how are you?." WBY is often used as a standalone greeting, in the same way as terms such as AITE and IGHT, which both mean "Alright?." ("What 'Bout You?" is a common greeting in Ireland.)

In the same way as WAU (What About You?), WBY can also be used to inquire about a person's view on a topic (i.e., to mean "What do you think?"). (See examples below.)

When I write WBY, I mean this: 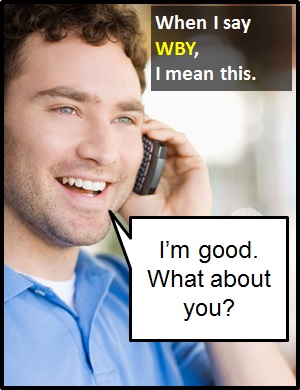 Examples of WBY in Sentences

Here are examples of WBY being used in conversations:

(Here WBY is being used with the meaning "(Hello), how are you?")

(Here WBY is being used with the meaning "What do you think?")

An Academic Look at WBY

WBY is an initialism abbreviation. This means it is pronounced using its individual letters (i.e., "Dublyoo Bee Wye"). (Initialisms contrast with acronyms, which are spoken like words.)

WBY plays the role of an interrogative sentence (i.e., a question), but it is commonly seen without a question mark. In other words, it can be written "WBY?" or "WBY."

Before the digital era, we would have just said "How 'Bout You?" instead of using WBY.

Example of WBY Used in a Text

WBY
Help Us To Improve Cyber Definitions
Please tell us using this form.