TUVM means "Thank You Very Much." (It can also be written TYVM.) Although TUVM is quite common, it is not as common as the terms below for expressing thanks: Of note, TUVM can also be used to mean "Thanks for nothing" (i.e. used sarcastically). It all depends on context.

When I write TUVM, I mean this: 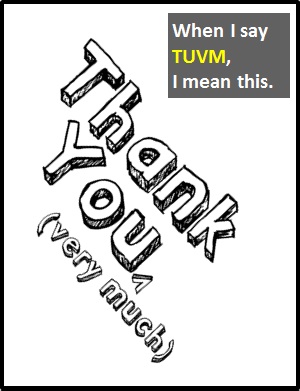 TUVM (or TYVM) means "Thank you very much."

Examples of TUVM in Sentences

Here are examples of TUVM being used in conversations:

(In this example, TUVM is used sarcastically, but Person A didn't spot that at first.)

An Academic Look at TUVM

TUVM is not used as another part of speech within a wider sentence. It is used as a standalone declarative sentence (i.e., a statement).

TUVM is an initialism abbreviation. This means it is pronounced using its individual letters (i.e., Tee Yoo Vee Em). (NB: Initialisms contrast with acronyms, which are spoken like words.)

Example of TUVM Used in a Text

TUVM
Help Us To Improve Cyber Definitions
Please tell us using this form.