What Does TLC Mean?

TLC means "Tender Loving Care." It is also the name of an American Girl Band and the IATA Code for Toluca International Airport.

The abbreviation TLC is used with the meaning "Tender Loving Care" to refer to the attention given to a person to lift their spirits or to promote their recovery from accident or illness. If an object is described as needing TLC, it usually means it is in a state of disrepair and requires renovation.

TLC is also the name of an American girl R&B band, formed in Atlanta, Georgia in 1991. The band's name was based on the first initial of the nickname of the original line-up: Tionne "T-Boz" Watkins, Lisa "Left Eye" Lopes, and Rozonda "Chilli" Thomas.

TLC were very successful during the 1990s, achieving nine top-ten hits on the Billboard Hot 100. They released their fifth (and final) album "TLC" in 2017. (Check out the video below of their 2010 number-one hit "Waterfalls.")

TLC means "Tender Loving Care." This is the most common definition for TLC on Snapchat, WhatsApp, Facebook, Twitter, Craigslist, Tinder, Zoosk and Match.com, as well as in text messages and chat forums.

TLC is also the Name of an American Girl Band.

TLC is also the IATA code for Toluca International Airport.

When I write TLC, I mean this: 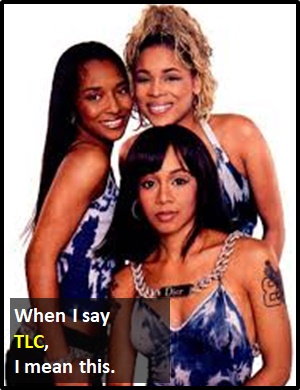 TLC also is also the code for Toluca International Airport and the name of a girl band.

Examples of TLC in Sentences

Here are examples of TLC being used in conversations, with the meaning "Tender Loving care:"

An Academic Look at TLC

TLC is classified as an initialism abbreviation, as it is pronounced using its individual letters (i.e., "Tee Ell See"). Initialisms are different to acronyms, which are spoken like words.

Example of TLC Used in a Text

TLC
Help Us To Improve Cyber Definitions
Please tell us using this form.