What Does TL Mean?

The abbreviation TL means "Timeline," "Talk Later," "True Love," "Team Leader," "Tight Lines," "Tough Luck," and "Tenderloin." Here is more information about each of these definitions of TL, together with examples of use.

TL is used widely online with the meaning "Timeline." On Twitter your TL displays a stream of Tweets from accounts you have chosen to follow, as well as suggested content, promoted Tweets and Retweets. On Google Maps your TL displays information about where you went, what time you left and came back, what kind of transport you used, and the photos you took. For example:

When used with the meaning "Talk Later," TL is often used at the end of a text message as a sign off. TL is a promise to get back in touch soon. In this context, TL carries a connotation of "I am too busy to talk now." For example:

TL is also used with the meaning "True Love" to express deep and sincere devotion. For example:

In business circles, TL is used with the meaning "Team Leader" to designate the appointed manager of a team.

When used with the meaning "Tight Lines," TL is a wish for good luck. Although TL comes from the world of angling, where "Tight Lines" indicate much success in catching fish, it is now used much more widely. For example:

TL is typically used with the meaning "Tough Luck," as an expression of sympathy with someone's ill fortune. However, it can also be used as a sarcastic response to someone moaning about their perceived bad luck. For example:

(Here TL is (almost) a genuine expression of sympathy.)

(Here TL is being used sarcastically.)

TL is used with the meaning "Tenderloin" to refer to a well-known neighborhood of San Francisco, California. TL is famous for its classic concert venues, historic theaters, colorful streets and underground art spaces.

"Timeline" is the most common definition for TL, especially on Twitter.

"True Love" is another common definition for TL.

"Team Leader" is a common definition for TL in business circles.

"Tight Lines" is another definition for TL.

"Tenderloin" is a common definition for TL in San Francisco.

When I write TL, I mean this: 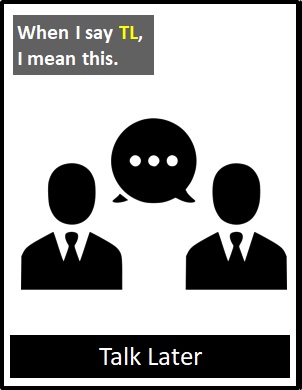 An Academic Look at TL

As it is pronounced using its individual letters (i.e., "Tee Ell"), TL is classified as an initialism abbreviation. Initialisms are different to acronyms, which are spoken like words. However, TL is not often spoken using its letters. It is usually employed for efficiency in writing and not efficiency in speech.

Example of TL Used in a Text

TL
Help Us To Improve Cyber Definitions
Please tell us using this form.