What Does PLL Mean?

The abbreviation PLL means "Pretty Little Liars," "Permute Last Layer," and "Phase-Locked Loop." Here is more information about each of these definitions of PLL.

PLL is used to refer to the US television series "Pretty Little Liars," which ran from 2010 to 2017. PLL was loosely based on the novels of the same name, written by Sara Shepard. It followed the lives of four high school girls who banded together against an anonymous foe who threatened to reveal their darkest secrets.

Amongst players of Rubik's Cube, PLL is used with the meaning "Permute Last Layer" (or "Permutation Last Layer,") to refer the final step of many methods of speed-solving the puzzle. There are 21 PLLs and each one is named after a letter. Here's a PLL tutorial:

In electronics a PLL is a "Phase-Locked Loop." In this context, a PLL is a system that generates an output signal whose phase is related to its input. The two signals will have the same frequency and either no phase difference or a constant phase difference between them.

"Permute Last Layer" is a common definition for PLL amongst aficionados of Rubik's Cube.

When I write PLL, I mean this: 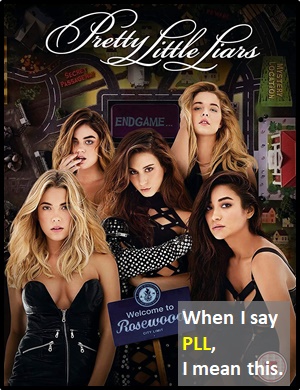 An Academic Look at PLL

PLL is classified as an initialism abbreviation, because it is pronounced using its individual letters (i.e., "Pee Ell Ell"). Initialisms are different to acronyms, which are spoken like words.

Example of PLL Used in a Text

PLL
Help Us To Improve Cyber Definitions
Please tell us using this form.