What Does TBC Mean?

TBC means "To Be Continued." The abbreviation TBC means a conversation or action is not finished yet and there is more to come following a break. TBC is commonly used to signal a pause in a conversation, or at the end of a TV programme screened in several episodes.

TBC can also mean "To be confirmed" meaning details or dates are not yet finalised (e.g., "The exact start date is TBC").

When I write TBC, I mean this: 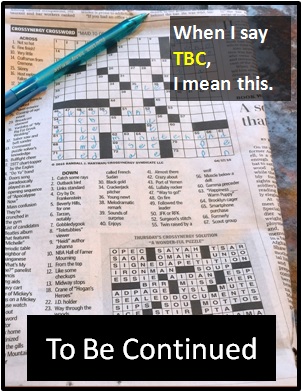 TBC means something is not yet complete.

Examples of TBC in Sentences

Here are examples of TBC being used in conversations:

An Academic Look at TBC

As it is pronounced using its individual letters (i.e., "Tee Bee See"), TBC is classified as an initialism abbreviation. Initialisms are different to acronyms, which are spoken like words.

TBC usually stands alone, as an interjection, and is often followed by an ellipsis (three full stops). e.g., "To Be Continued..."

Example of TBC Used in a Text

TBC
Help Us To Improve Cyber Definitions
Please tell us using this form.