The abbreviation STEXT is used with the meaning "Sexy Text Message" to refer to a sexually suggestive or explicit message. A STEXT may be solely text based, but could also include images.

Whilst both STEXTs and SEXTs can be considered harmless fun between consenting adults, they can be seen as sinister if used inappropriately. According to news reports, there have been many instances of STEXTs being used to threaten or hassle recipients, including young children.

When I write STEXT, I mean this: 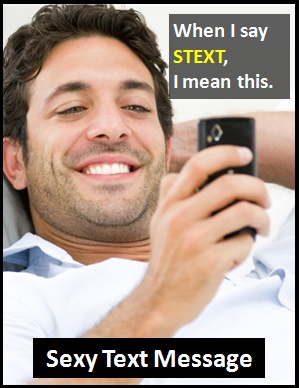 Examples of STEXT in Sentences

Here are examples of STEXT being used in conversations:

An Academic Look at STEXT

STEXT did not exist before the digital era.

Example of STEXT Used in a Text

STEXT
Help Us To Improve Cyber Definitions
Please tell us using this form.

ASLP (Age, Sex, Location, Picture) GPOY (Gratuitous Picture Of Yourself) HOAY (How Old Are You?)