What Does STEEZY Mean?

The word STEEZY, is used with the meaning "Effortlessly Stylish" to describe anything that looks stylish in a completely natural and uncontrived way. STEEZY is a term that is particularly popular in ski and snowboard circles, where a skier might be referred to as STEEZY if they could execute difficult tricks or turns on the slope with seemingly minimal effort.

STEEZY is a variation of STEEZ and STEEZE, both of which mean "Effortless Style."

When I write STEEZY, I mean this: 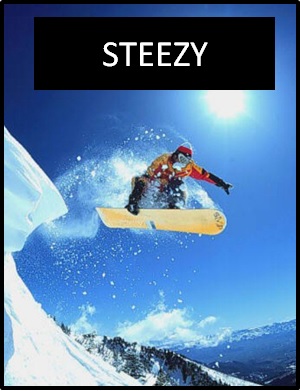 This snow-boarder is definitely "STEEZY."

Examples of STEEZY in Sentences

Here are examples of STEEZY being used in conversations:

An Academic Look at STEEZY

As it is formed by merging two words into one, STEEZY is classified as a portmanteau word. STEEZY is actually formed by amalgamating the words Stylishly and Easy.

Before the digital era, we might have said something like "They make being stylish look easy" instead of saying STEEZY.

Example of STEEZY Used in a Text

STEEZY
Help Us To Improve Cyber Definitions
Please tell us using this form.