What Does STEEZ Mean?

The word STEEZ is used with the meaning "Effortless Style" to describe someone who looks effortlessly stylish without appearing contrived. It is a term that is widely used, especially in ski and snowboard circles.

STEEZ can also be written as STEEZE and is a variation of STEEZY (Effortlessly Stylish).

In 1995, American rap artist GZA released a track called Shadow Boxin' GZA, which features the word "STEEZ" in the lyrics.

When I write STEEZ, I mean this: 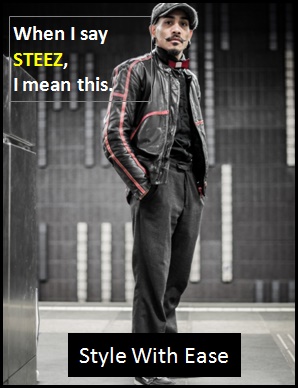 This cool guy has STEEZ.

Examples of STEEZ in Sentences

Here are examples of STEEZ being used in conversations:

An Academic Look at STEEZ

As it is formed by merging two words into one, STEEZ is classified as a portmanteau word. It is formed by amalgamating the words Style and Ease.

STEEZ is typically used as a noun (i.e., a naming word).

Before the digital era, we might have said something like "She makes it look so easy" instead of using STEEZ.

Example of STEEZ Used in a Text

STEEZ
Help Us To Improve Cyber Definitions
Please tell us using this form.