What Does SOUND Mean?

SOUND means "good," "acceptable," or "reliable." The word SOUND is very common in the UK, especially in the North West around Liverpool. It is also seen in the British simile "sound as a pound."

SOUND means "good," "acceptable," or "reliable" (UK). This is the most common meaning for SOUND on social-media platforms such as Twitter, Facebook, and Snapchat.

When I write SOUND, I mean this: 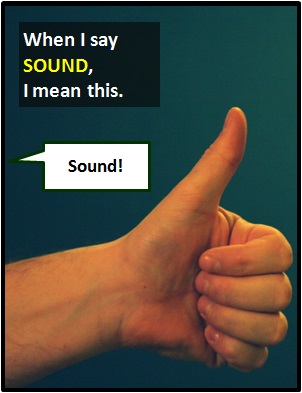 SOUND is a common adjective in the UK.

Examples of SOUND in Sentences

Here are examples of SOUND being used in conversations:

An Academic Look at SOUND

SOUND is used as an adjective (i.e., a describing word). For example:

Example of SOUND Used in a Text

SOUND
Help Us To Improve Cyber Definitions
Please tell us using this form.