What Does SOB Mean?

SOB means "Son of a Bitch."

SOB is used in text messaging and online as an abbreviation of the term "Son of a Bitch."

SOB is typically used as an offensive insult. However, it can also be used as an interjection (to express surprise, anger, etc.), or to express an opinion (usually negative, but sometimes positive) about someone or something. For example:

When I write SOB, I mean this: 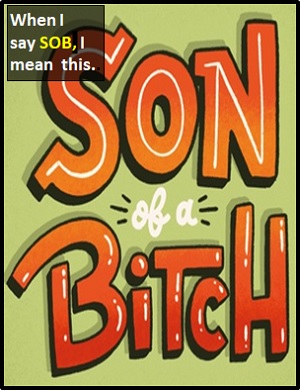 SOB is usually, but not always, an insult.

An Academic Look at SOB

SOB is an initialism abbreviation. Technically, this means it is pronounced using its individual letters (i.e., Ess Oh Bee), but it is not often said using its letters.

Before the digital era, we would have just said "son of a bitch" instead of using SOB.

Example of SOB Used in a Text