What Does SMS Mean?

The SMS has been in use since the early 1980s, and was standardized in 1985 by the Franco-German cooperation Global System for Mobile Communications (GSM) to provide a system which could be used across all mobile networks.

When I write SMS, I mean this: 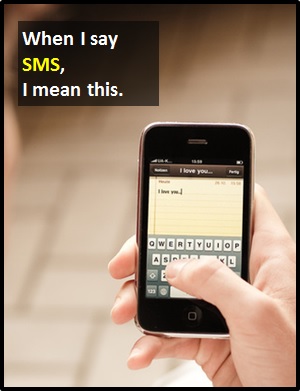 The image shows an SMS on a smartphone.

Examples of SMS in Sentences

Here are examples of SMS being used in sentences:

An Academic Look at SMS

SMS is an initialism abbreviation. This means it is pronounced using its individual letters (i.e., Ess Emm Ess). (Initialisms contrast with acronyms, which are spoken like words.)

SMS is typically used as a noun. The use of SMS as a verb has fallen out of use in recent years, and has been replaced with the verb “to text”. (For example: “I will text you” is now far more commonly used than “I will SMS you”.)

Before the digital era, SMS messaging did not exist, so there is no direct comparison. We might have said something like "I will ring you" or "I will write to you" instead of SMS.

Example of SMS Used in a Text

SMS
Help Us To Improve Cyber Definitions
Please tell us using this form.